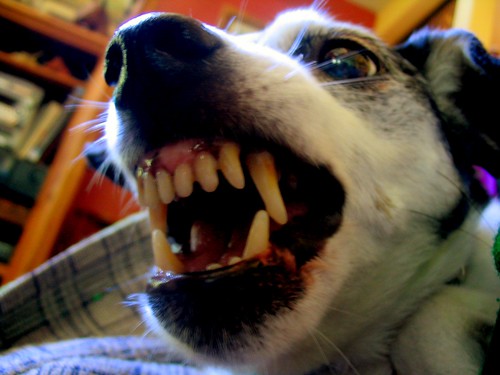 The term ‘red zone’ dog has come into vogue to describe aggressive dogs. There is the connotation that these dogs are different in some fundamental way from other dogs. The term is often used to justify the use of severe punishment in order to train them. It’s as though, unlike every other dog on the planet, they are only able to learn if punishment is used.

Creating ‘red zone’ dogs is a fairly straight forward process. Take a dog, preferably one who is fearful, and force them to deal with things that upset them. Add one or more humans who are either arrogant, uneducated, ignorant, mentally ill, or some combination of the aforementioned. Do not allow the dog the freedom to get away, and maintain constant pressure on them in the form of punishment or threats of it. Any resistance on the dog’s part should be addressed with physical punishment, almost anything will do, a collar yank, a slap, kick or alpha roll. Yelling at the dog can suffice in some cases. The goal is to remind the dog that they are completely out of control of what happens to them, and that humans will make sure it stays that way.

Finalist in the Dog Writers of America Writer’s Competition!

"Hope you have loads of your great book in stock...just told 150 folks in Toronto, 60 in Rochester,MN and about 150 in Pittsburgh to order it post haste. (by the case for the rescues & shelters)." Sarah Kalnajs

"Just love to tell people when they do a terrific job. This is a great site for people who are dealing with nervous, shy or fearful dogs. I am glad there is a lot of information on the site instead of just ads. Hopefully, it will help keep a few lucky dogs from being institutionalized! I know this site requires a lot of work! Thanks" J.