Subscribe to Our Newsletter
By fearfuldogsPublished On: May 7th, 2012

By the looks of Sunny’s half-hearted feints at whatever was in the leaf litter that had caught his attention, I was guessing snake, or toad. I am a fan of amphibians and have no grudges with reptiles so hurried over to be sure Sunny didn’t do any damage. What I found dragging itself through the leaves surprised me. I was sure it was some kind of mutant, a poor insect, its tiny wings stunted by pesticides or a cruel genetic mishap. Its body, at least 2 inches long was larva shaped, covered with a thick coat of white hair and as fat as my thumb. With three pair of maroon colored legs it clutched a brown leaf as I reached down to pick it up.

I debated what to do with it. It had a pair of perfect antennae each one shaped like a leaf that had nothing left to it but the veins. If I put it down a swarm of ants might attack it, and have dinner for months. I could try to carry it home and see what became of it but I feared I’d crush it or break something if I wasn’t paying attention. Stepping off the trail I found a small beech tree and let it crawl off my finger and onto the trunk. It clung to the bark and as its body had three strong contractions I realized what Sunny had found.

My four dogs continued up the trail, as this was our habit. One by one I heard their paws pounding on the packed dirt as they returned to find me. Sunny was the first, Finn the last. I called their names as they raced past, not looking for me off to the side in the trees. When they realized I was not going anywhere they discovered a variety of things to keep their attention. Nibbles bounded after chipmunks and squirrels rustling in the leaves, Annie and Sunny had a short squabble over who had the right to put their head into the hole being excavated in the dirt at the base of a stump, and Finn chewed first on sticks and then began pruning saplings while making noises that would make you think he’d been angry with them for years.

During visits to the cloudforest in Costa Rica I’d watched Blue Morpho butterflies emerging from their chrysallis. Their wings are initially pliable and small, but as they hang from their former home they begin to pump the fluids from their bodies into their wings. I watched as the same thing began to happen with the insect I had placed on the trunk. Its two pair of wings were a soft green, the same color as the young leaves of the tree it was on. The larger wings had a line of a deep maroon along their top edge. There were hints of spots, one on each wing.

No matter how closely I stared and tried to see the changes I could only note that they had occurred, the process was so gradual. The wings were 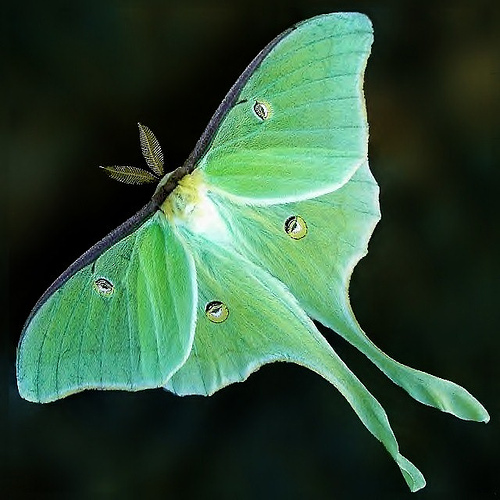 soon longer than the body, which was gradually shrinking. I sat for an hour watching big changes I couldn’t even see. Once I was sure that I was watching a Luna Moth becoming itself, with the dogs’ hearty approval we headed off again. We follow a loop that brings us to what remains of the orchard of an old homestead, through a pine forest and across two streams. Back at the start of the loop I decided to repeat it and see if I could find the moth again. I remembered that once their wings are fully formed they need to harden and set. I’d hoped to be able to see its first wingbeats. I was able to find it and the tendrils of the second set of wings, that had been smaller than the first, were now longer and still slightly curled and soft.

I’d never seen a Luna Moth during the day. They are rare, but not unusually found battering the lights on the porch at night. I’d certainly never seen one in their journey from pupa to adult. Not knowing how long the whole process took I decided I was satisfied with what I had been fortunate enough to see. The dogs had enjoyed the delay and the detour but were happy to turn around and head home. Two of them were unrecognizable from the dogs they were when they first came to live with me.

It was a great day to have wings.