Subscribe to Our Newsletter
By fearfuldogsPublished On: August 22nd, 2011 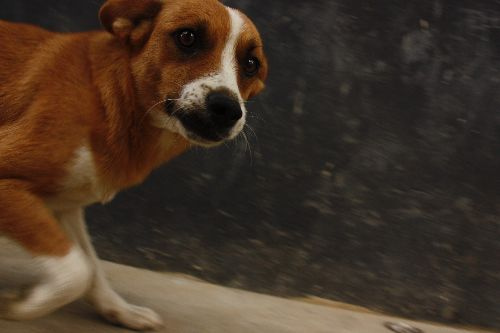 During a seminar I suggested that people with fearful dogs reward their dogs for moving away from what scares them. Did I mean reward them for trying to flee? For many this flies in the face of what their goal for the dog is. Don’t we want to get dogs closer to what scares them? Well, yes, and no.

Working with any dog is a process and throughout that process the dog’s behavior changes, at least that’s what we’re hoping for. But sometimes the changes are not necessarily what we’d like. As a fearful dog gains confidence we may see happy, eager to engage behavior toward a trigger. Or we may see a dog who with some confidence discovers that they are more willing to be assertive and express what they truly feel, which for some dogs is, GET AWAY FROM ME! It’s that ‘get away from me’ behavior that can become dangerous for a dog and whatever they are concerned about.

Unless you know with surety that a fearful dog is going to end up loving a trigger, you take a risk whenever you encourage them to get closer to it. Early on with Sunny I used to take him for off leash walks on a wooded trail near town. When people appeared he would run off into the woods, sometimes barking. As time went on he became bolder and I remember thinking how much progress he was making when he no longer chose to run off into the woods, but instead followed after people for a bit. But I also remember having a flash of doubt at what was really going on. Was he truly just investigating them? Was that head lift toward the jacket tied around their waist a sniff or had he tried to get his mouth on it? Because he had never shown any aggressive behavior toward me or my husband, nor had any of the people who had handled him previously mentioned aggression, it was not a consideration I kept in the front of my mind. I do now.

I am not suggesting that we never work with our dogs to increase their comfort level when in closer proximity to their triggers. It’s how we go about it that matters. Suzanne Clothier’s treat/retreat technique provides dogs with the opportunity to practice moving closer to a trigger while never removing the option to move away from it. When we take the option to move away from something scary, a dog may hunker down and suck it up, hating every second of it, some may be ok with it and figure out that it’s not as horrible as they expected it would be, but there will be some who will respond aggressively in order to make the exposure end. Don’t ever eliminate ‘move away’ from a dog’s repertoire of behavior choices.

Ultimately our dogs need to learn skills for dealing with what scares them, if only peripherally. But how we get them there matters. The ability to decrease proximity between themselves and a trigger is not necessarily proof of success. You may be willing to go into work and pick up your paycheck and still hate your boss. Or the work you do. People are not the only animals that can go ‘postal‘.