Don’t take my lead on this one!

Subscribe to Our Newsletter
By fearfuldogsPublished On: May 14th, 2010 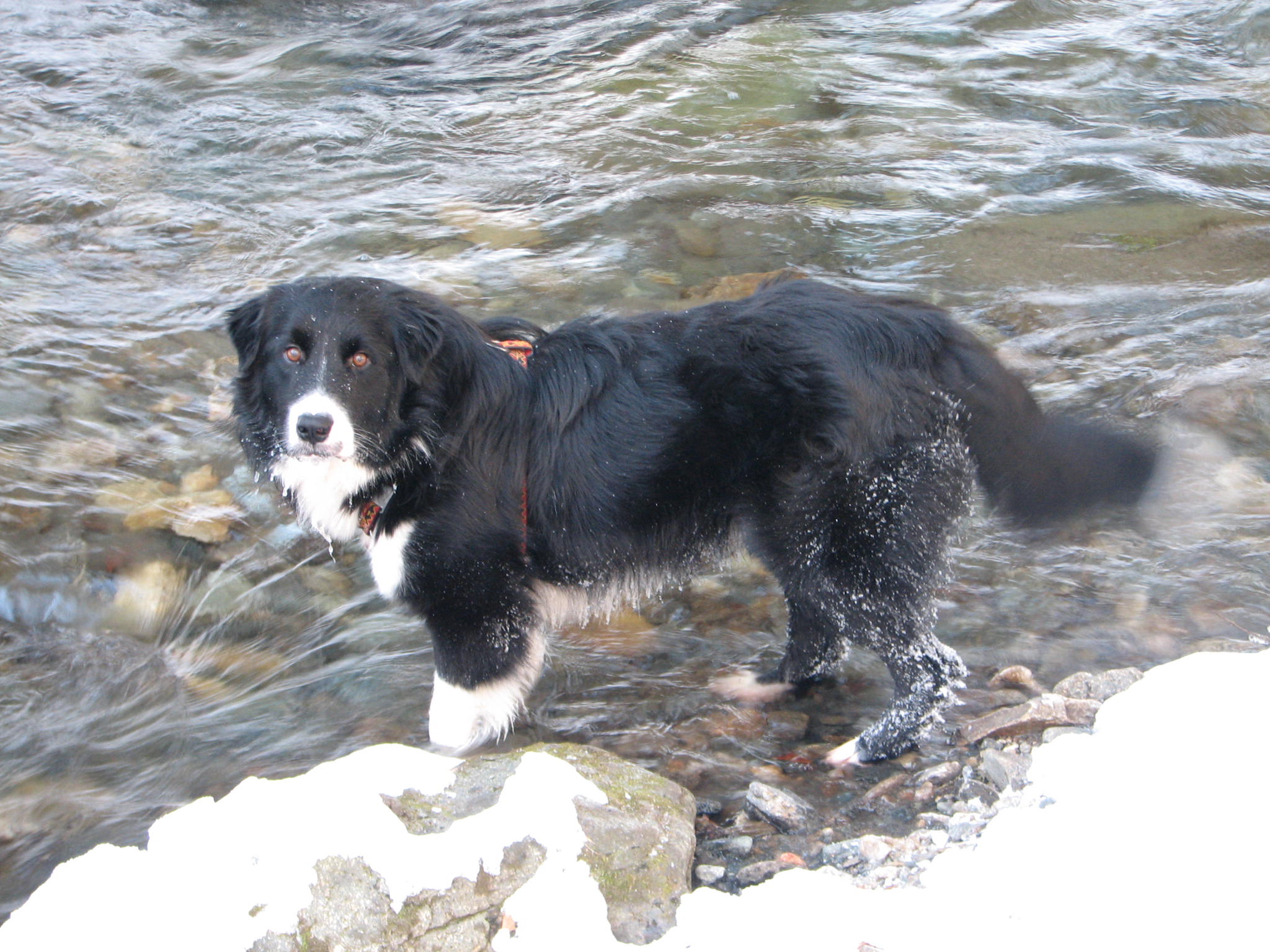 Sunny came to us a dog with no skills for interacting comfortably with people. That was obvious, but what wasn’t obvious to me at the time was that being in a house was also a horrifying experience for him as well. It was winter in Vermont when he first arrived and having grown up in an Arkansas hoarder’s compound, being an outdoor dog was not an option for him at the time. Rather than provide Sunny with a cozy, secure place to hide I set him up in a corner of our living room. I thought, incorrectly, that giving him a crate to retreat to would only be ‘enabling’ his fears. Ugh. To date it’s one of the biggest regrets I have about how I handled him. Chalk it up to ignorance and naivete.

My first attempt, the day after he arrived, to take him for a walk on leash almost ended in disaster. Like a kite plummeting to earth in a windstorm Sunny bucked, pulled, spun and leaped, nearly slipping his collar. Had that occurred there is little question in my mind that I would never have seen him again. I’ve seen other dogs ‘kiting’ at the end of leashes and it sends waves of horror and pity through my body. The fear and desperation the dog is experiencing is palpable. So for weeks Sunny lived huddled in his corner surrounded by papers. Other than shifting his position from one direction to another, he didn’t leave this spot, even if no one was in the house. To discover whether he was having exploratory forays on his own I would leave tidbits of food on the floor around the room, returning to discover them where I’d left them. I doubted he had checked them out and left them untouched.

When I decided it was time to take Sunny outside for walks I fitted him with a harness that he could not slip out of, encouraged him out of the house and promptly almost got dragged off my feet as he tried to flee from me. Getting him back into the house was the opposite experience. Luckily for me, though so sad for him, Sunny seemed to know when his only option was to give up and go wherever the current dictated, so I never had to pull him, feet dragging, to get where we needed to go. On the occasions when it was apparent he could not move I would pick him up and carry him, the alternative of yanking him along was too distasteful to me.

In order to defecate while on a leash Sunny had to get as far from me as he could, circle and then squat, his eyes wide and locked on me. Because I rarely walk my dogs on leash, my collection was limited to 4-5′ lengths or the short slip leashes embossed with the names of vet clinics on them. I had seen retractable leashes, the kind with a large plastic handle into which a cord or flat nylon leash pulls out and coils back into automatically, and purchased the longest I could find. After I had, without too much damage to my person, figured out NEVER grab the leash to stop the dog at the risk of slicing your fingers off, and had sorted out the button for keeping the leash from either extending or retracting, it seemed to fit the bill. Sunny could move away from me, and with only one hand I could manage the leash.

Early one winter morning I attached the leash to Sunny’s harness and as I cracked open the storm door he bolted out, and when all 5o pounds of him hit the end of the leash I was pulled face first into the door. The crashing and sound of my surprised (and unprintable) shout frightened Sunny yet again and thwarted in his attempt to escape into the trees he headed down the driveway. I had managed to step outside the door and as Sunny advanced back toward the house the leash retracted and then as he continued past, extended until again he hit the limit and I was pulled around and this time stopped when I was slammed into the side of the house.

In retrospect I wish one thought had crossed my mind, ‘cut your losses’, and I had reeled him in and called it quits for the day, but he was due for a walk. Since he had access to the outdoors Sunny had stopped using the papers I had put down for him. As events unfolded I had the distinct impression that it looked like a scene of choreographed slapstick and might have even been comical if Sunny wasn’t so terrified and I hadn’t ended up with a bleeding gash on my forehead.

It was only during our walks down the dirt road alongside the river that I ever got glimpses of what ‘normal’ might look like for Sunny. His movements would loosen up, he’d sniff and explore, urinating on special spots which only made sense to a dog. He needed this walk. Bundled up in my powder blue down jacket which I had bought years before for winter camping and which was rated to -40, I looked like a toddling Michelin man, a hat pulled down to meet my glasses which now sat cock-eyed on my face, bent from my run in with the house. Smudges of blood had been left on my cheeks as I’d wiped it out of my eyes.

Sunny did loosen up after about a mile of walking and as we were headed back a neighbor pulled up next to us. It was a weekend morning and I’d hoped that we’d make it through the walk without any passing cars, but as folks are apt to do in rural areas, he slowed down and stopped for quick chat. When he opened his window and looked at my face his eyebrows flew up and he asked, “Are you OK?”.  The walk had helped both Sunny and I calm down, but my chest was still constricted and felt like every fiber was pulled taut. The fear, pain and frustration I had felt from simply trying to exit the house with Sunny, had not dissipated completely. I held back tears and tilted my head slightly toward Sunny who had run to the end of the leash up into the trees lining the road, “Yes,” I responded and he gave me a grimacing smile laced with pity, understood I was not in the mood for a conversation and drove off.

As I walked up the driveway, my husband who had not seen our dramatic departure had come outside to greet us on our return. The emotional edge that I had been teetering on slipped out from under me when he said, “Oh My God! What happened?” and as the tears started flowing I sobbed, “This f**cking dog!”. When John reached to take Sunny from me I knew it wasn’t a good idea, but I wanted someone to step in and make it better or make it all go away, and as he took the handle of the retractable leash and grabbed a hold of Sunny’s harness and pulled him in the house I blurted out, “Don’t scare him!” But of course Sunny who had been perched on an emotional edge over a much deeper and darker abyss than I can ever imagine, was about to go tumbling down.

After putting Sunny into the house John stepped back outside and the noises we heard next coming from inside horrified us. I have never heard a dog being killed but the shrieking we heard was what I imagined it would sound like. There were crashes and thuds and I thought the other dogs must be attacking him, a possibility that was not only unlikely, it was impossible since all the other dogs were outside with us. Back inside I surveyed the scene and deduced what most likely had happened.

After getting Sunny into the house John, unversed in the finer points of flexi-leads, had let go of both the harness and the extended leash which dropped to the floor and then zipped toward Sunny, hitting him and sending him into a blind panic. He rammed into the sliding glass door, lost control of his bowels, spraying the wall, doors and couch, knocked over a large potted plant and raced to his latest safe spot under my desk in our office which is where I found him, panting, exhausted with his eyes glazed over. He appeared physically uninjured but to this day I cannot say whether or not that experience left him with other scars.

As I cleaned the walls and glass doors the realization that all the well-meaning advice I’d been given about how to handle a fearful dog was just not cutting it for me or Sunny. He needed more than time and love. He wasn’t snapping out it, nor was forcing him to do things that scared him helping either. I needed better information and more help, but first I needed a new damn leash.