Subscribe to Our Newsletter
By Debbie JacobsPublished On: March 1st, 2019 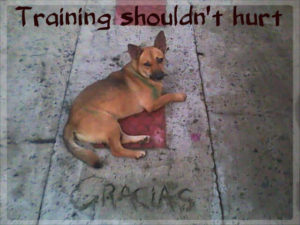 Years ago, before the rise in podcasts I was asked to be part of a radio show featuring 3 dogs trainers. The show was being recorded for broadcasting at a later date. As soon as it was over I told the host I did not want to be part of the program. Luckily for me (and potential listeners) there were problems with the recording and the show needed to be scrapped.

When I spoke to the producer of the show he explained that he wanted to present different trainer’s viewpoints so that owners could decide which approaches or methods were going to be better for their dog. One trainer, when asked about how to deal with dogs who guarded their food bowl recommended that if owners claimed ownership of everything, including the floor the bowl was on, the dog would not guard their bowl, because it wasn’t actually theirs, it was by default, the owner’s because it was on the floor. Don’t spend too much time trying to sort this one out, it’s like an Escher painting, staircases lead to nowhere. The other trainer suggested that an e-collar was an acceptable tool to use with dogs suffering from storm and sound phobias. I wanted the f*ck out of there.

The producer, like many, did not understand that all animals learn the same way. We can either train them systematically using the least amount of, or no, force, fear, intimidation and pain, or not. Dogs will learn despite how we label what we are doing with them. I can’t speak for oncologists but I imagine that I felt a similar way one might feel were they asked to be part of a medical show about cancer, along with a reiki master and a past life reader. Being open minded, neutral or objective does not mean all treatments should be considered equal or given the same amount of credence.