Subscribe to Our Newsletter
By fearfuldogsPublished On: February 20th, 2010 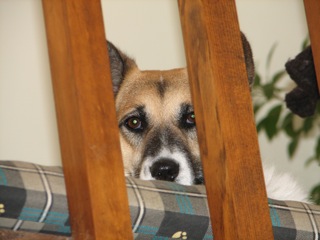 I am constantly trying to eliminate the belief and the feelings I get when I assume that dogs’ failures to respond to my requests are due to their choosing to be; disobedient, defiant or dominant. Not that dogs don’t necessarily have those as motivations for behaving inappropriately but most dogs, and especially fearful dogs, likely have other things going on.

Staying with me for the next ten days is lovely little Stella, possibly a corgi/beagle mix. When I first met Stella she was unable to approach me and needed to drag a leash so I could get her to go in and out of the house as I needed her to. Her owners have done great work with her and although her first reaction to new people is to be startled, she recovers quickly and has become one of those lucky, fearful dogs that ‘once they get to know you’ is playful and happy.

Today as we headed out for our daily woods walk all the dogs eagerly scampered out of the house, except for Stella. Stella lagged behind, looking out of the open door but not moving through it. I admit that my initial response to this behavior was a tinge of impatience and frustration, ‘geesh come on already’. I had to remind myself that Stella was probably uncomfortable either going through the door and/or going past me, not uncommon problems for fearful dogs.

As with any behavior we are after with our dogs, there are different ways to get them. We can be sure that the dog knows how to perform the behavior and understands our cue for it. I could have put a leash on Stella and had her walk in and out of the door, with big rewards as we did so. I could teach Stella to target my hand or something in my hand and use that behavior to help her move through doorways.

Since Stella has gone in and out doorways before without hesitation I decided that there was something about the way I was asking for the behavior that caused her reluctance to follow the other dogs. Even if her owners used a different cue it doesn’t take much thought for a dog to follow a gang of excited dogs out the door. She wasn’t afraid of the other dogs, so I assumed I was the problem. I changed how I was standing at the door, turning my body slightly and avoiding direct eye contact as I invited her out. I waited a few seconds and when she didn’t comply I shut the door and moved away for another few seconds. I tried it again and on the third offer she came right out the door when asked.

It’s easy to become frustrated and impatient with a dog, especially if we think that they are behaving in ways that are meant to defy or confront us. Keep in the front of your mind that it’s often not a dog’s unwillingness to comply, but their inability to do so, that prevents them from doing what is being asked of them.