Subscribe to Our Newsletter
By fearfuldogsPublished On: October 6th, 2010 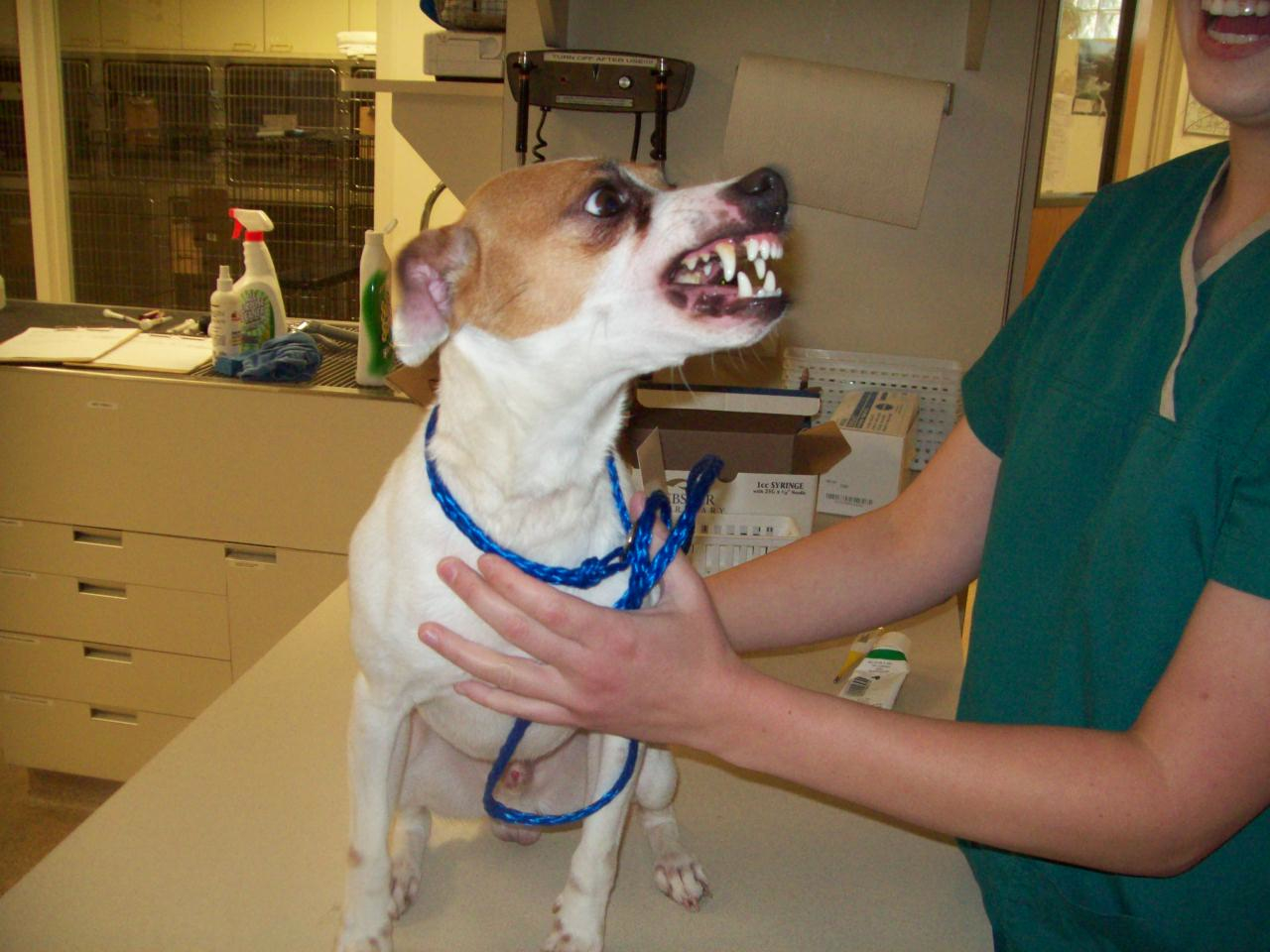 Do you know what this dog is saying? Photo courtesy of Olathe Animal Hospital in Olathe KS

The use of punishment, of any kind, for cases of fear and aggression is contraindicated, meaning the risk of making the situation worse is greater than potential benefit. The idea that you can slap someone across the face and have them come to their senses is the stuff of old movies. Try it with a person and then be ready to duck while you’re waiting to hear, “Gee thanks I needed that,” when instead they take swing back at you.

If a shock collar or other means of punishment is needed to interrupt a commonly occurring problem behavior the solution begins by keeping a dog out of any situation in which the behavior is likely to be displayed. Changing responses, especially responses that are the result of an overwhelming emotion, is slow going. So while it is possible to manage a dog’s behavior using punishment*, the emotional response does not go away and may intensify. A dog that has been managed with positive punishment around its triggers** often will, when given the chance (and these chances occur more than we’d like), revert back to his original response to the trigger.

Studies that looked at anger and violent behavior in children found that kids exposed to violence or trauma themselves are more prone to angry outbursts or have what we’d call ‘short fuses’. The reason lies in the very real changes that occur in brains that have to process fear, pain and trauma.

Few would argue that it makes sense to punish a dog that is cowering and hiding. The problem arises when the dog’s response looks less like fear and more like anger. While we may never know exactly how a dog might discriminate between their emotions, punishing a dog that is behaving aggressively because they are afraid, doesn’t make sense either.

I know how it feels to be on the other end of the leash with a dog that is doing its best to imitate Cujo, and the emotional rush I get does little to help me remain calm and think rationally. I want the behavior to stop and may also be scared or angry and my ‘gut’ response is to just get the dog to ‘KNOCK IT OFF!’. This is only a stop gap measure, for permanent positive change to occur I have to work with the dog, get the dog to draw on her own resources and internal controls, rather than continually having to control her outbursts myself.

When upset or aroused, anything which adds stimulation to the dog’s experience can backfire.

Here’s a story about a man who killed another man because of their dogs’ tangled leashes. According to the story, what appears to have been the final trigger that led to the fatal stabbing occurred when the victim put his hand on the other man’s wife’s arm, in way, which as it is described, was nonviolent and nonthreatening. But the fellow with the knife was upset. He was angry and already aroused due to the previous interactions he had. Surely he ‘knew’ that using violence against someone was wrong, he’d been punished for it in the past (served jail time). Yet one man had his throat slashed and another was killed. Why? Because a couple of little dogs got their leashes tangled? Doesn’t make sense does it?

And that is the point. Sense was not involved.

In order for our dogs to learn what it is we are trying to teach them they need to be able to ‘make sense’ of what is happening to them. An upset, over threshold dog has a hard time seeing the dots we’ve laid out for them, never mind connecting them. But herein lies the beauty of working with dogs. If we don’t want our dogs out barhopping at midnight, it’s easy to control that.

If we are going to change behaviors which are based on powerful emotional responses we have to work on changing the emotional response in order to guarantee, with any kind of success, that the alternate behavior we want will be reliable. Classical counter conditioning and desensitization are effective and safe techniques to use for making this happen.

Having reasonable expectations for our dog’s behavior is important. The reasons for their fear may be such that they are not easily modified. Medication can help the process along with desensitization and counter conditioning, but in the end a dog might always prefer the life of a country mouse.

How much an owner is willing or able to modify their dog’s environment is a component of how successful a dog can become. A dog can be walked during quieter hours of the day or night and they don’t have to join their owner in the pet shop. Strangers or other dogs can be kept away.

It takes time and energy to change the behavior of a fearful or reactive dog. Just because we can put a device on a dog to control their behavior, doesn’t mean that we should. The best controller of a dog’s behavior is the dog herself. Together with our dogs we can help them gain the skills and confidence to navigate their world so we can both enjoy ourselves when we’re out in it.

*Punishment is any consequence that makes it less likely for a behavior to be repeated. Positive punishment refers to ‘adding’ something to the situation, like a collar jerk, a shout, or hit. Negative punishment refers to the ‘taking away’ of something to stop the unwanted behavior, for example a dog that resource guards its owner learns that the owner gets up and leave whenever the guarding behavior occurs.

This post was written in connection with the Never Shock A Puppy Campaign which has some great prizes available this week. Check it out!