Is getting another dog helpful for a fearful dog?

Subscribe to Our Newsletter
By fearfuldogsPublished On: January 1st, 2012 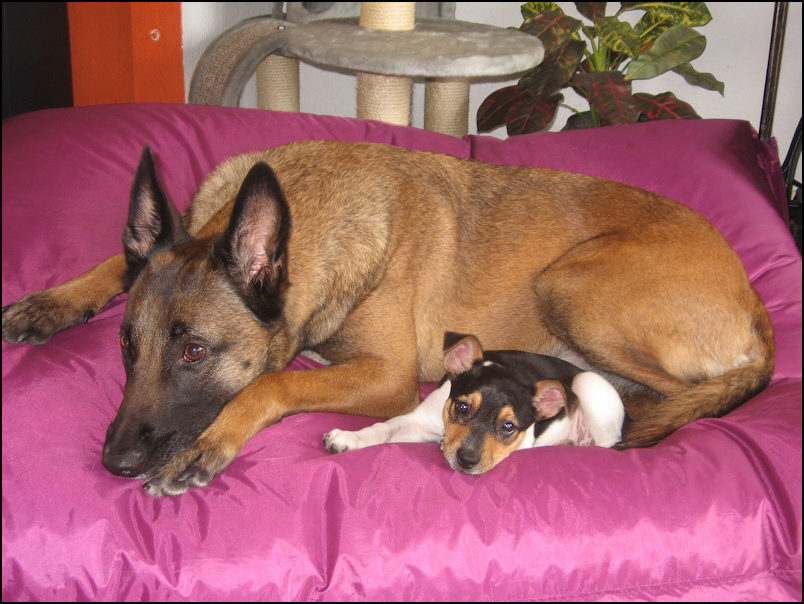 It’s not uncommon for people who are living with a dog who is afraid of people or new environments to wonder if getting another dog would be helpful. It’s a generous thought I’ll give it that, but there are many potential pitfalls to take into consideration before making that leap.

Being around others that a dog feels safe with and trusts can help lower stress levels. This is why comforting a dog who is afraid can be so beneficial. With lowered stress some fearful dogs are able to do things they might not be able or willing to do on their own. If we like the things they are able to do it makes sense that we’d consider providing them with that benefit all the time by adding a dog to our household.

Why, if the dog you brought home felt more comfortable being around other dogs, did you adopt him to begin with if you didn’t already have another dog in the house?

Unless you deliberately set out to adopt a dog with fear based behavior challenges what makes you think that you, the breeder, rescue group or shelter is going to do a better job a second time around at finding an appropriate dog for you who: not only has to be a good pet, needs to rise to the occasion and be a stellar role model and companion for a fearful dog?

Are you willing to hire a professional trainer or behaviorist to help you find an appropriate dog to add to your household?

Are you prepared to spend more time training and more money for the upkeep of an additional dog?

What will you do if it doesn’t work out as you’d hoped?

It’s a lovely thought that a fearful dog will see another dog interacting with people, other dogs, novel objects, etc., and learn to do so happily themselves. I could watch a dozen people jump out of a plane and still be reluctant to fling myself out the hatch. There are people who won’t taste a new food even though an entire group of people consumes it routinely, but we expect dogs to do better than this? What if instead the new dog learns to be more wary and cautious of things by following the lead of the fearful dog?

Pairing a friendly dog with a fearful dog for the benefits of social buffering can end up backfiring. I don’t worry when my border collie Finn races up to people to greet them. His behavior may be considered rude but the worst that is likely to happen is that someone will end up with paw prints on their pants. He likes people and sees every human as a potential frisbee tosser. Sunny on the other hand would be better off not being drawn toward people by following Finn’s example. He’s not comfortable with people and getting closer to them can end up scaring him. This could lead to an aggressive response.

Unless I have complete control over Finn’s behavior, being able to stop him in his tracks as he heads off to greet someone, I run the risk of having Sunny join him. Finn’s arousal is benign, Sunny’s is not. Annie, my adult cocker spaniel displays her ‘greeting disorder’ anytime a new person or dog appears on the scene. She is harmless, annoying but harmless. But her reactivity is not helpful when I am trying to train a fearful dog to stay right where he is. In trainer speak we call this ‘proofing’ a behavior, and means that we practice a cue, such as ‘wait’, over and over, in many different situations, with a variety of distractions, in order for the dog to gain the skill to perform the behavior wherever, whenever we ask for it, regardless of what is going on around them. It takes time and effort. Sunny has a solid ‘wait’ in many situations, but he is affected by the arousal level of other dogs, and this makes getting the behavior more challenging.

This is often when people will suggest the use of some kind of powerful punishment to teach the dog that moving is not an option. I will not go into it in depth in this post but the risk of ‘contextual conditioning’ is real. Anything that the dog experiences along with the punishment can become associated with the negative experience, including the thing they already are not feeling good about. To this day I am not inclined to eat cherry snow cones because as a kid I caught a stomach bug and the last thing I ate prior to being sick was a cherry snow cone. The snow cone itself did not cause the vomiting, but was associated with it.

To trust that a dog will not harm something we need to be certain that they are no longer afraid of it. Better that they love it, but short of that, a dog is less likely to bite something they do not feel threatened by. There are no magic bullet cures for fearfulness in dogs. The benefits of social buffering are real, but the tasks of training and using behavior modification are ours. We need to get our understanding of dog behavior and training polished up before we expect another dog to ‘fix’ our fearful dog.