It takes a village, and a tractor doesn’t hurt either

Subscribe to Our Newsletter
By fearfuldogsPublished On: August 31st, 2011

When the good people on the Green River road in Guilford, Vermont lost access into Brattleboro they did what people anywhere with the motivation and tools would do, they helped themselves.

Hurricane Irene, downgraded to a tropical storm by the time she reached New England dump 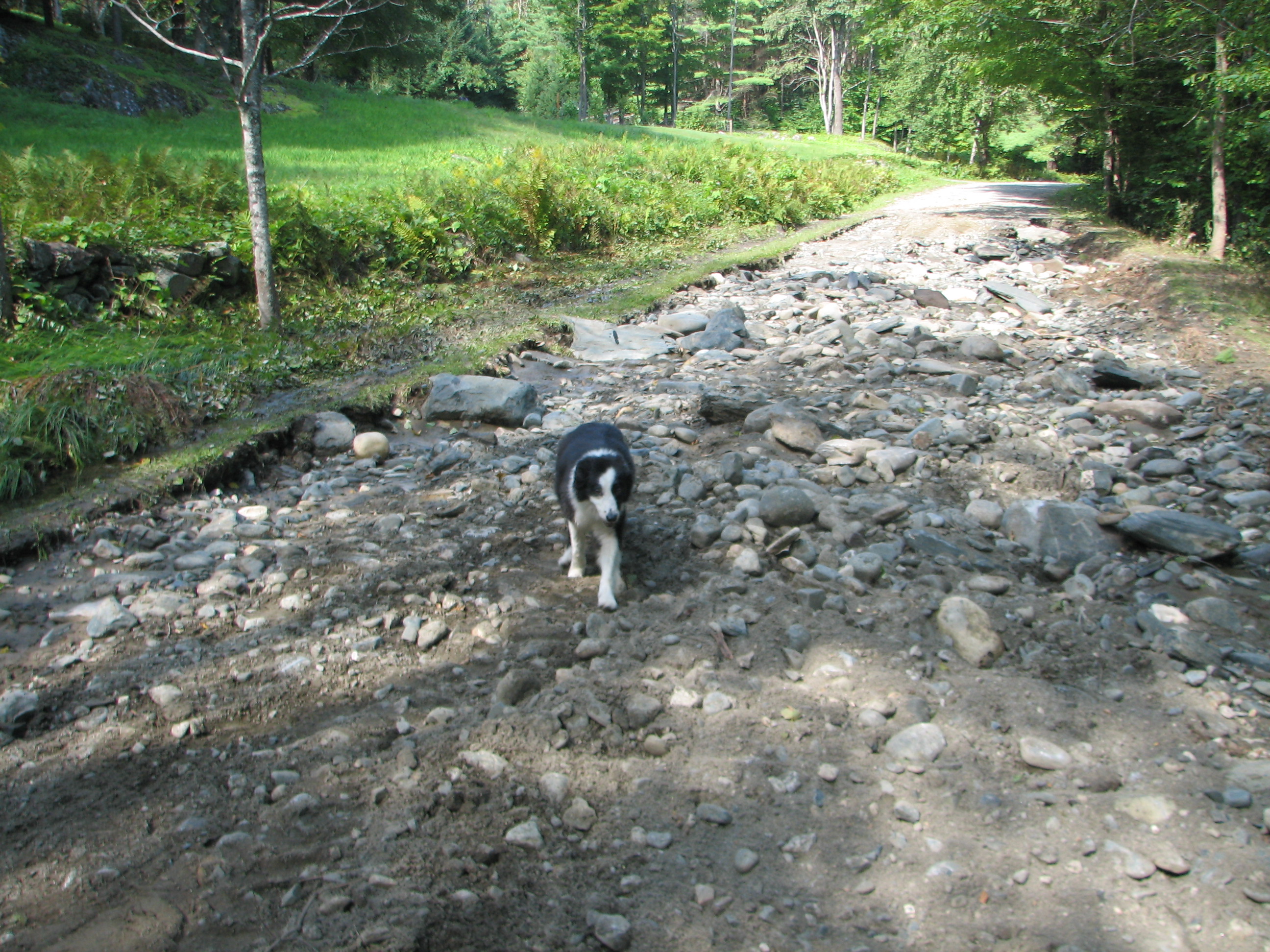 ed records amounts of water, in a short time, on mountainsides already saturated by previous rains. Witnesses say that within minutes streams and rivers became raging torrents. The USGS chart shows the Green River going from under 100 CFS to close to 20,000 on Saturday. A hot tub was seen floating down the Green River, along with a variety of other debris. The high water in Brattleboro dumped tons of silt in basements, buildings and downtown, along the Green River the water stripped tons of gravel from roads and embankments, making travel downstream to Greenfield and upstream to Brattleboro impossible.

When I returned home on Tuesday, after being stuck in Washington DC where I had attended the BlogPaws conference, I was surprised to discover that the road I was prepared to walk, from the Green River Covered Bridge to home, appeared to be driveable, barely. When I was within half a mile of my house I saw what looked like a road crew. One neighbor with the heavy equipment to do it, had started, from upstream, working his way down, to make 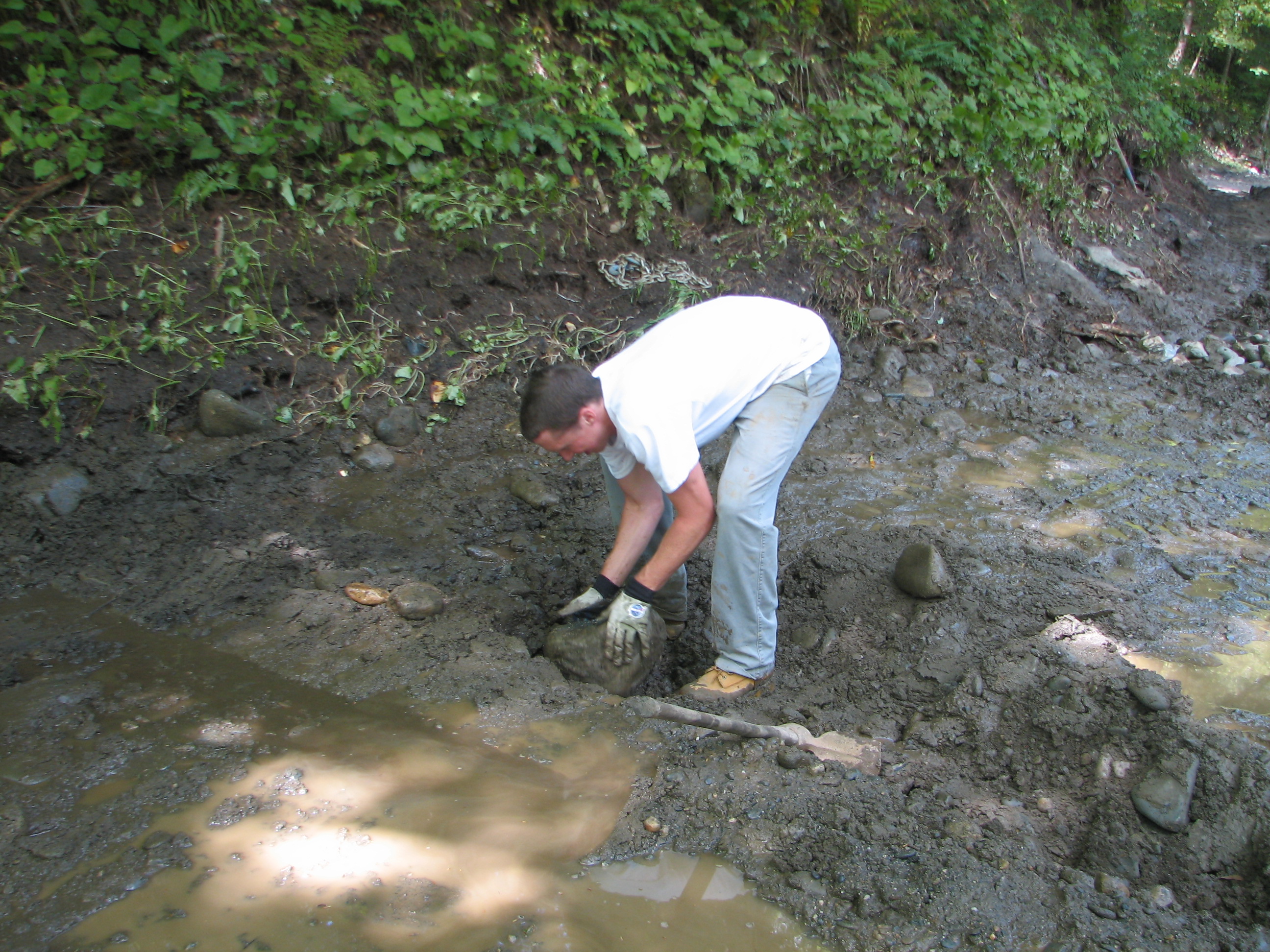 repairs so residents were able to get out but more importantly, utility crews and rescue vehicles could get in. A resident in the area had already required emergency assistance for health reasons and rescue personnel were forced to make it to his home on foot. Other neighbors grabbed the pick axes and shovels languishing in sheds, put on their work gloves and joined in. Along with wreaking havoc, disasters also galvanize people and neighbors who had never met before were greeting each other and sharing their stories of the floods.

The road is not fully repaired, nor has it been assessed for safety, and residents ask that sightseers refrain from traveling on it as the traffic degrades the repairs they have made. It is not possible to travel past the State line into Colrain, MA, as the road has washed away completely. We don’t expect official road repairs to begin until the area has been assessed by FEMA. The road is not only our lifeline into town for supplies, one resident faced job loss if she was unable to get to work. Many of us are still unable to drive the full distance to our homes, but with walking shoes and backpacks are looking forward to the ‘given no choice’ opportunity to walk along our beautiful river each day during times when we’d usually be hurrying off to work, or returning home.

Our neighborhood was lucky. Property was lost but no homes were damaged and our family and pets are safe. Others not far away were not so fortunate. Seeing my piece of the planet stripped to bedrock is disconcerting, but seeing my community come together is heartening. We are already planning the Hurricane Irene party to share pictures and videos of the event. By then we hope to have our road rebuilt, but if not, the picks and shovels will be stored and we’ll take out our skis. 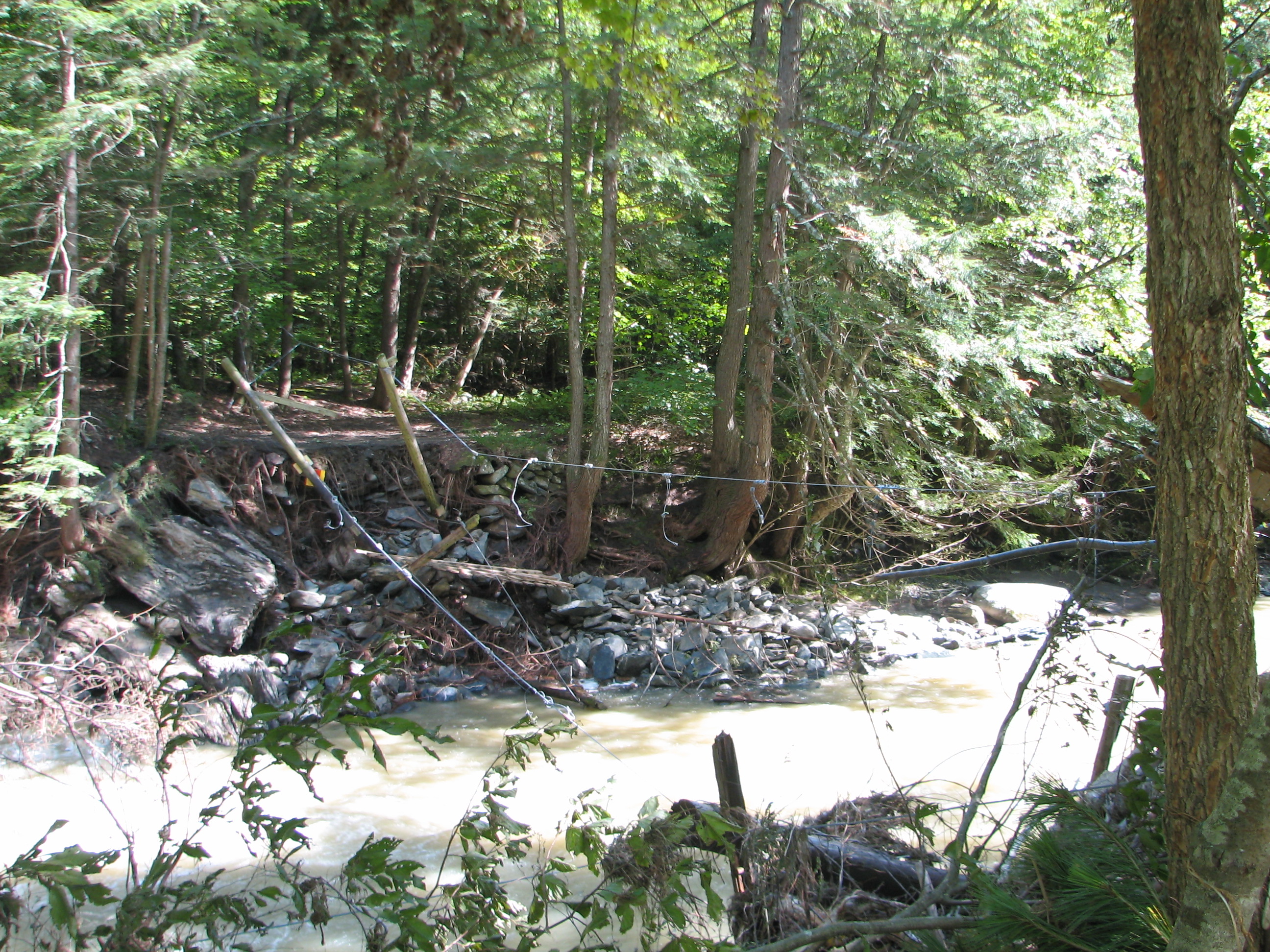 The swing bridge over the Green River is gone. The bridge is used by snowmobiles to access VAST trails. 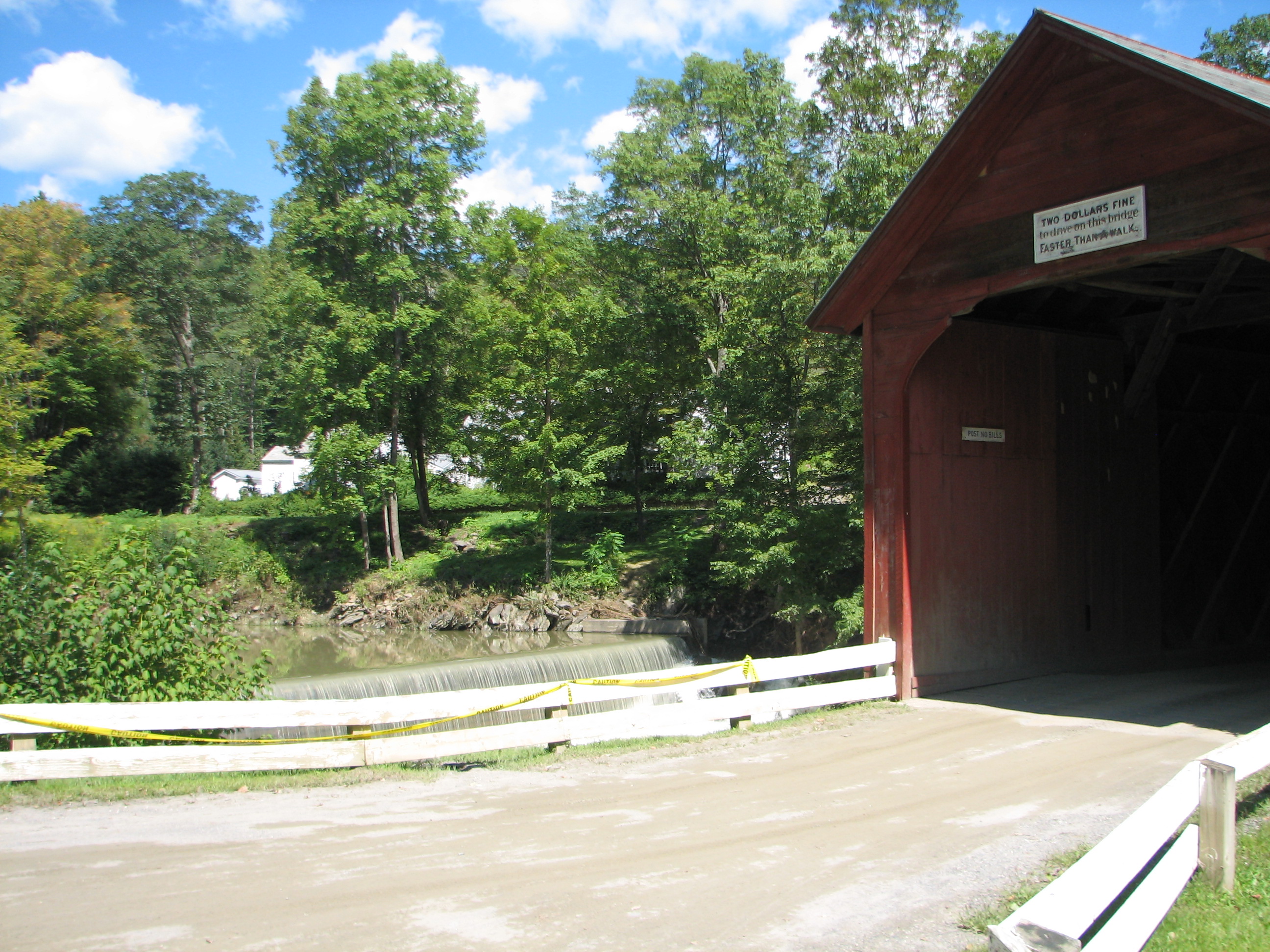 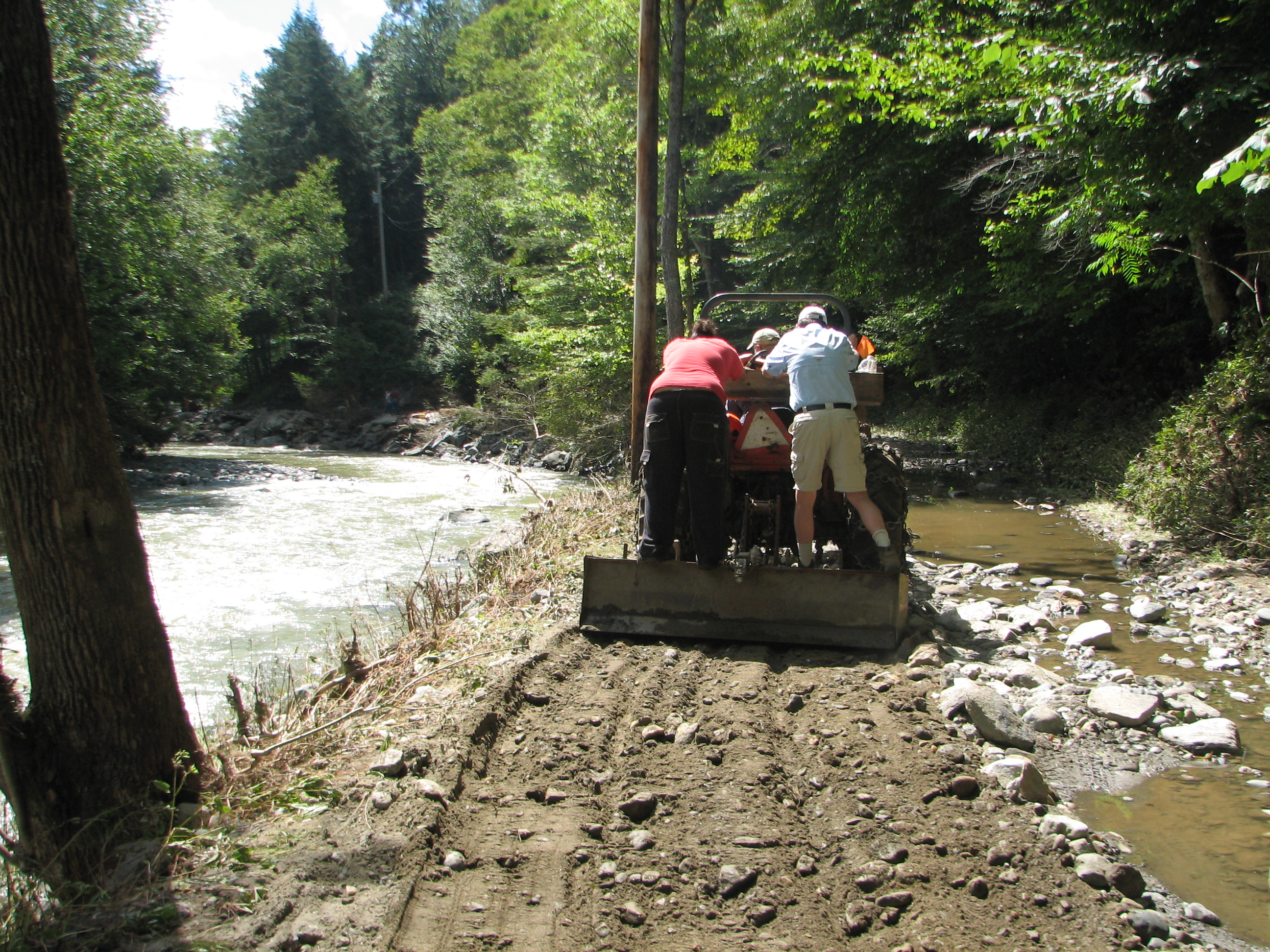 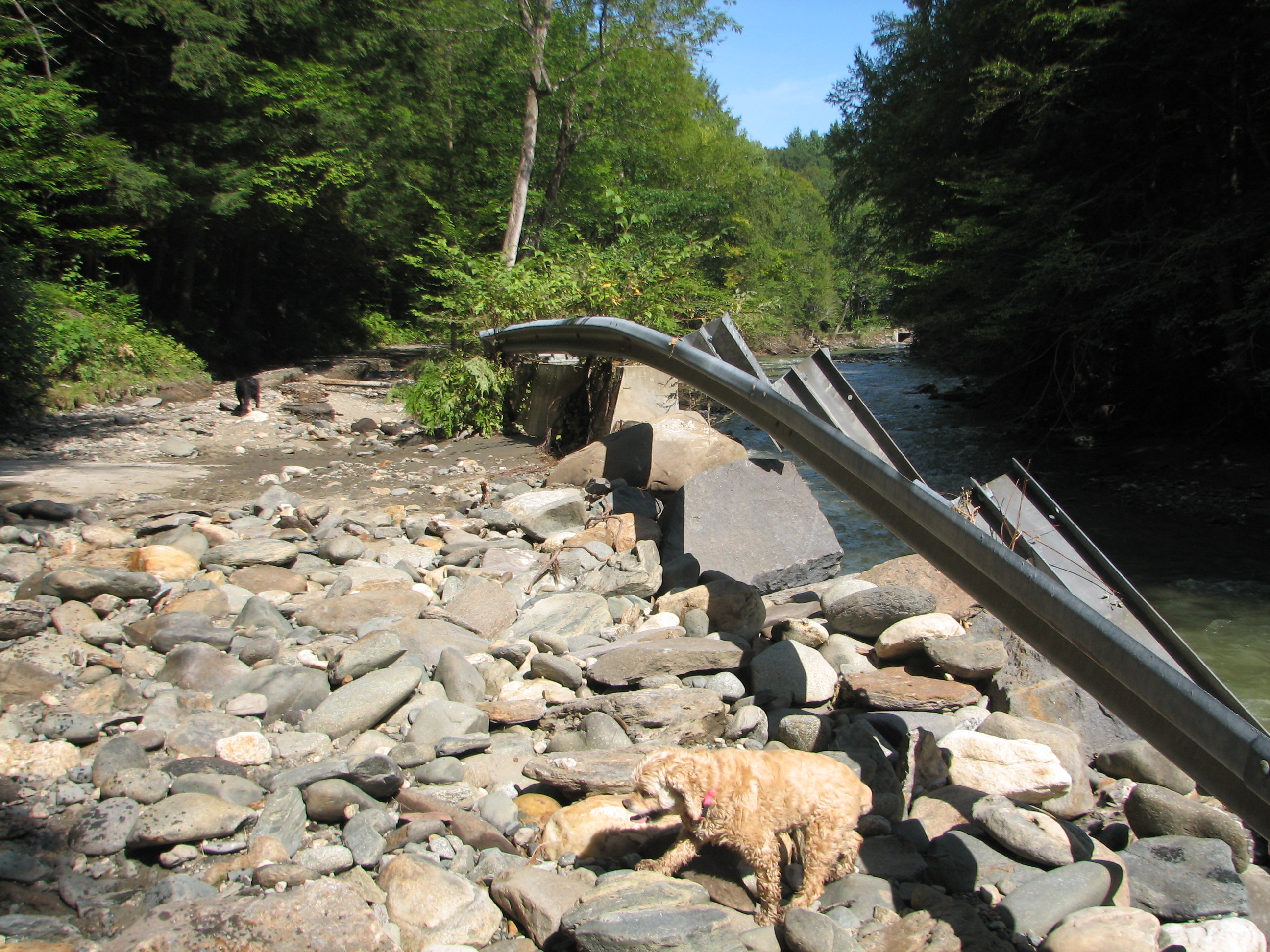 The Green River Road in Colrain MA after the flood 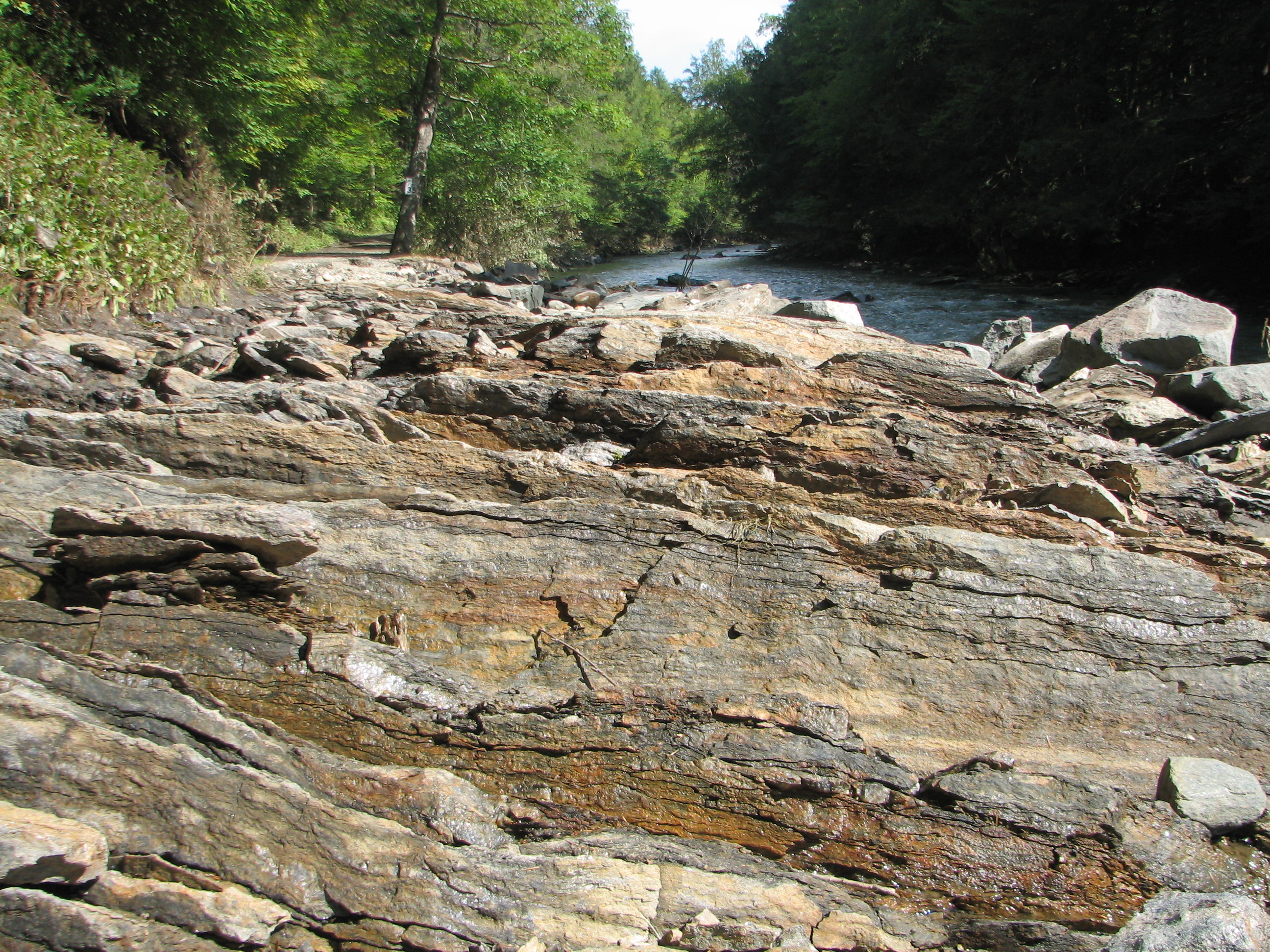 A driver's nightmare and a geologist's dream 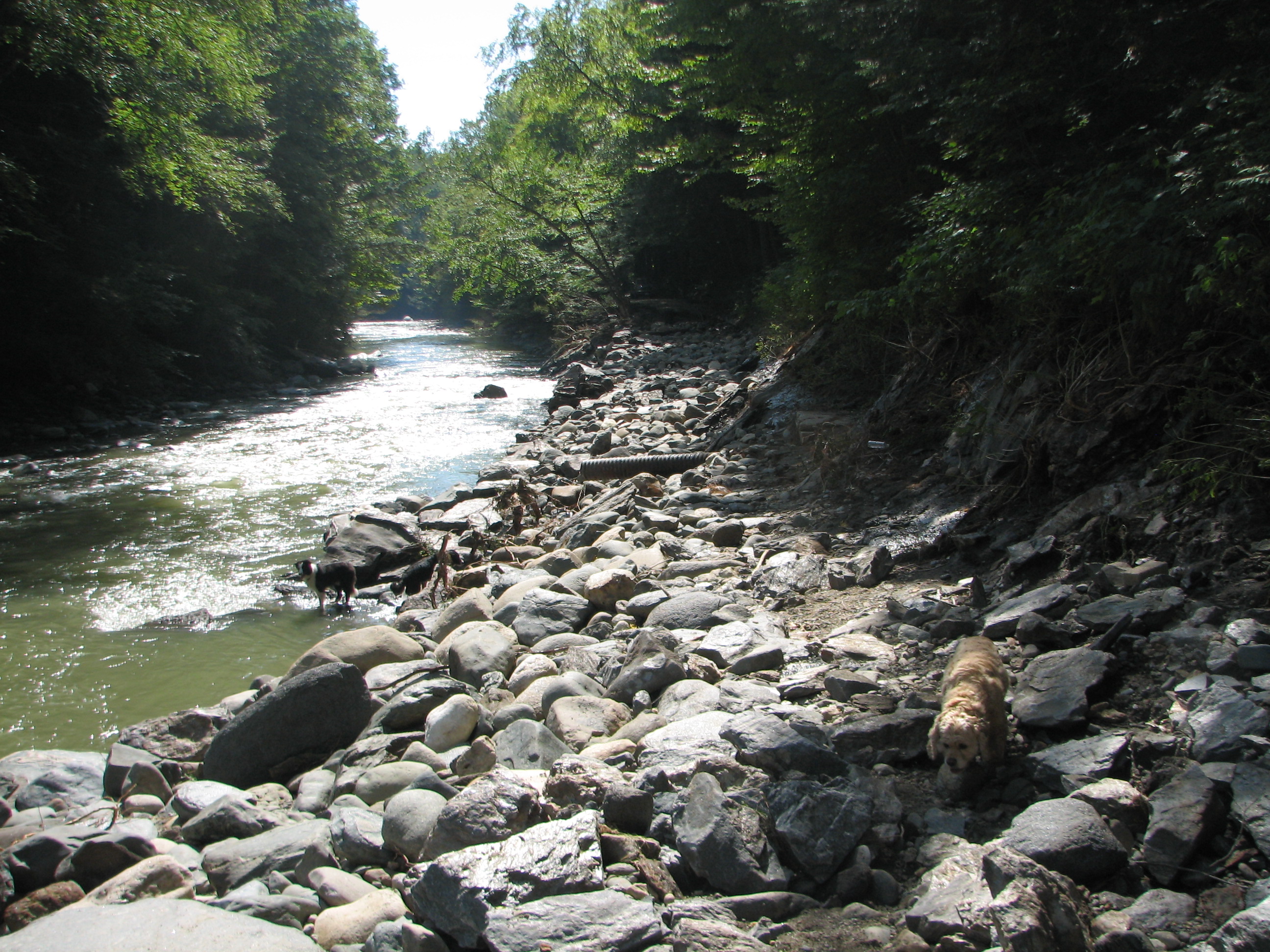 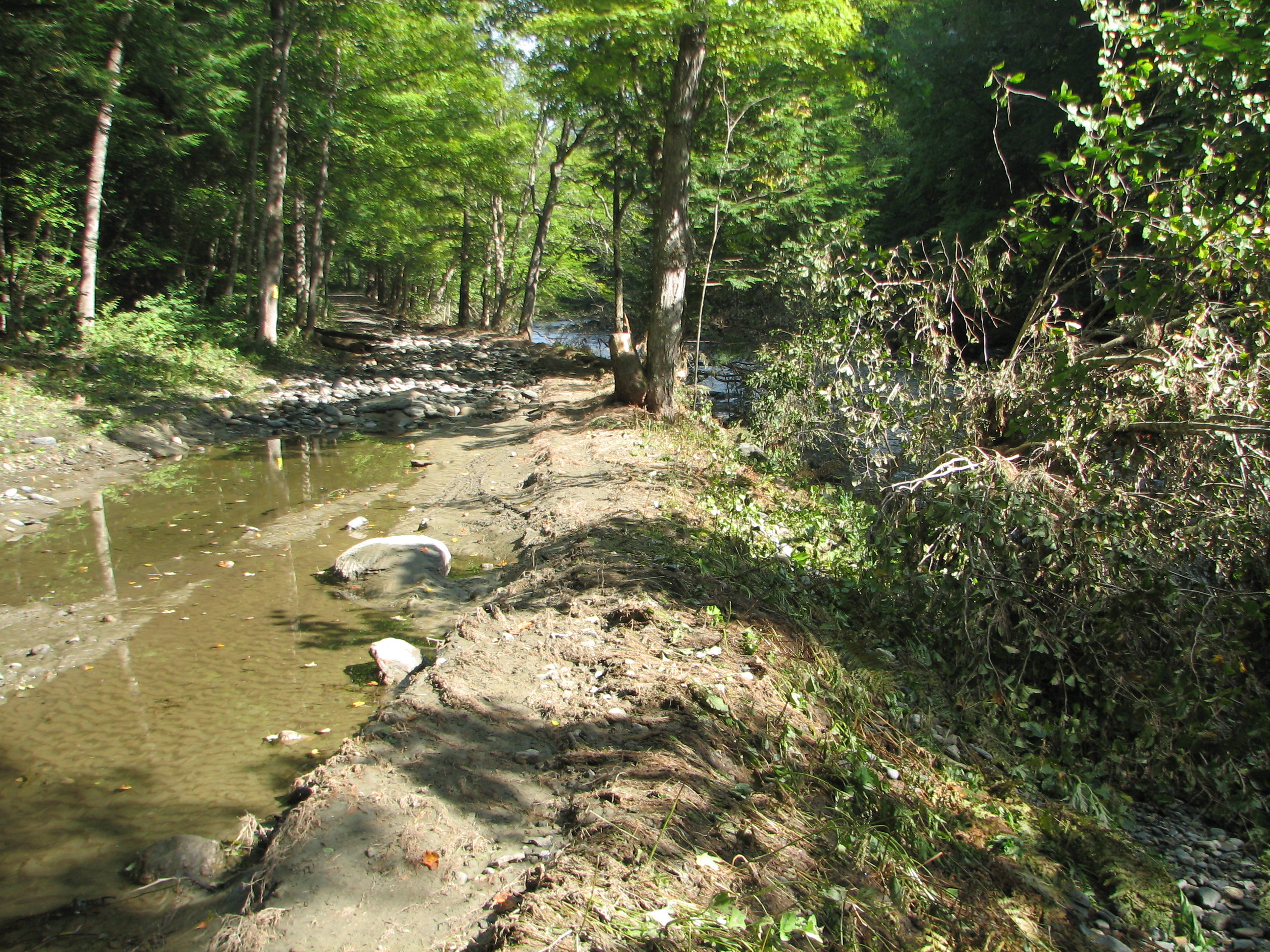 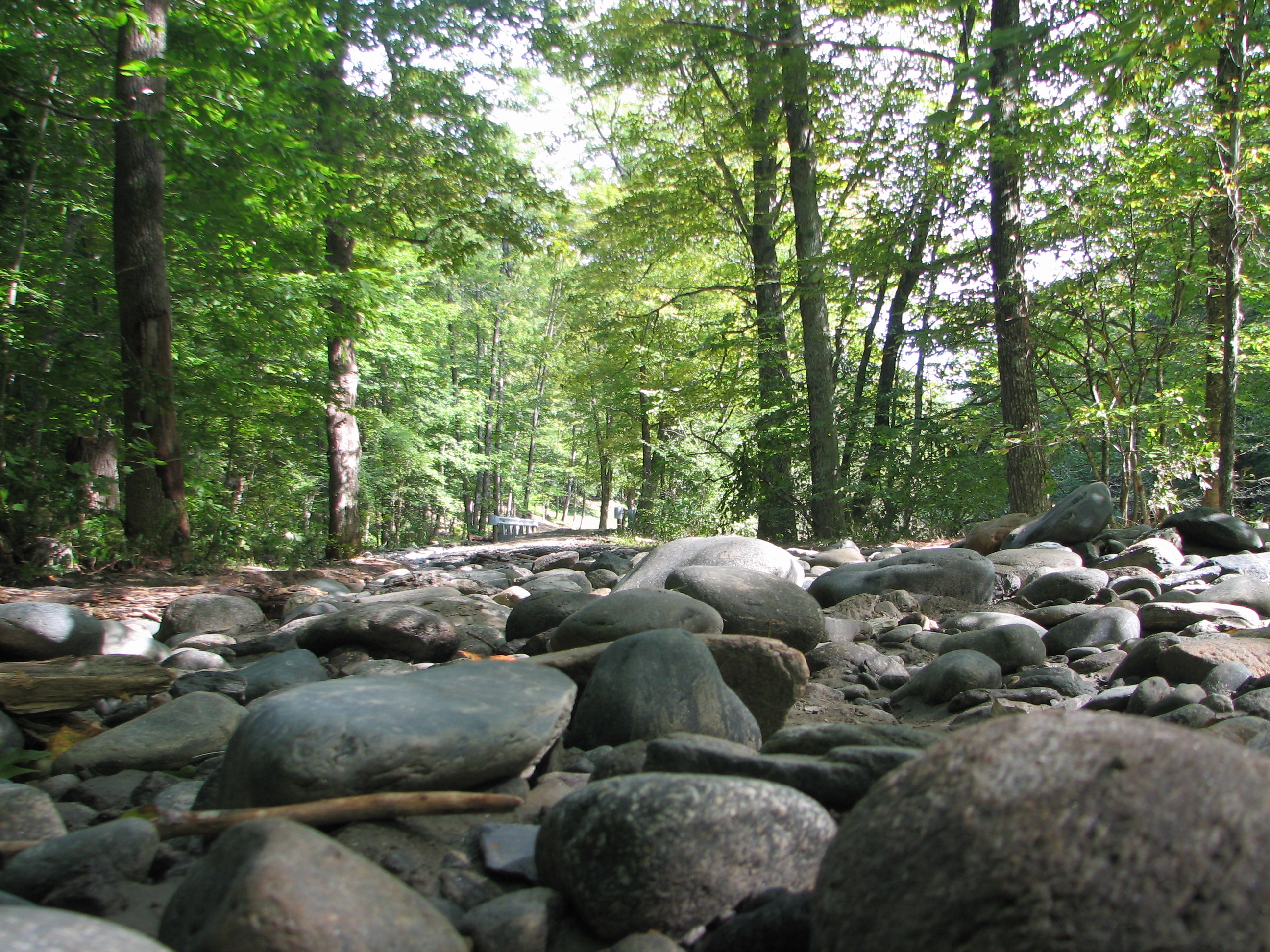