It’s not just about being nice to your dog

Subscribe to Our Newsletter
By fearfuldogsPublished On: October 21st, 2010

I often say to people that I can talk about dogs anywhere, with anyone. Friends who asked me to officiate their wedding may have thought I was joking when I suggested that weddings were not excluded. I was not joking. As a dog trainer I had learned something about animal behavior that applied to people as well and that is that it’s not ‘stuff’ that makes us feel so good, it’s the work we do to get it, that gives our brain’s reward system the biggest hit of ‘feel good’.

What does this have to do with marriage? It means that even though we have goals in our lives and things we want to acquire, the process we go through to achieve what we want, has the potential to be even more rewarding than the goal itself. The relationships we have as we go through this process are integrated into it, and can be strengthened and improved because of it. So if you ask me to officiate your wedding, yes, I will talk about dogs.

Trainers who think that using food or other rewards is merely the mark of a trainer who is too concerned about being ‘nice’ to dogs are missing the point. The work, or training, we do with our dogs has the potential to trigger a dog’s reward system, which means that whatever we are using as a ‘reward’ is secondary to the enjoyment the dog is experiencing while learning new skills and behaviors. If you’ve ever seen a dog that has been trained using a mark and reward system (such as clicker training) you know what I’m talking about. The enthusiasm they show for performing or offering behaviors can at times be overwhelming! When I pick up a clicker my cocker Annie fairly dances around the room. Her response seems over the top in relation to the small food reward she’s going to gain. And indeed it is, because what is really making her gleeful is figuring out what she has to do to get the treat.

When working with fearful dogs if we become part of what triggers the dog’s reward system, using play and food rewards, we become one of the stimuli that causes the dog to feel good. Take this and apply it to whatever people, objects or situations cause a dog to be afraid and, you will change the dog’s emotional response along with its accompanying behavior.

It’s not necessarily easy to accomplish, which may be why many trainers resort to force and intimidation to get dogs to perform behaviors. But fear and pain change the equation. The stress and anticipation of punishment affects the brain differently than does the anticipation of reward. We are more likely to provoke aggressive responses in a dog if they feel threatened, or, create a dog who ceases to offer behaviors for fear of reprisal or has just plain given up trying.

Thanks to the wonderful trainers at Canines in Action for sharing this blog post with accompanying video by Dr. Robert Sapolsky. You can also watch the complete TED lecture here on The Uniqueness of Humans. 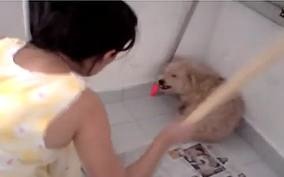 We have the ability to define the culture of our relationships with our pets. Being nice to them may be the place to begin.