Subscribe to Our Newsletter
By fearfuldogsPublished On: August 31st, 2010 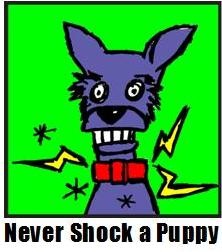 This post is being written in conjunction with the Never Shock A Puppy Campaign.

When I got out of university and participated in a year long outdoor leadership program playing New Games was all the rage. The motto of New Games is ‘Play hard, play fair, nobody hurt’. Games are designed so that people play with each other, not against each other. There is still plenty of action and consequences for being tagged, or caught out, but this usually means your role changes and doesn’t mean you can’t play anymore. We learned to use them with groups ranging from young children to corporate executives. I was not surprised that one of the games is played by dog trainers to help both trainers and owners to better understand their dogs.

The ‘modeling clay’ game goes like this-One or two people (the players) leave the room while the rest of the group comes up with a behavior, pose or action, they want the players to perform. When the players return to the room they are given only one piece of information; they are told ‘yes!’ when anything they do is close to what the group has decided they want from them. Clicker trainers will ‘mark’ any behavior that leads to the correct behavior with a click. It seems easy enough until you are one of the players trying to figure out even simple behaviors; stand and raise one foot. There tends to be lots of experimenting with movements and you can watch the wheels turn in players’ brains as they try to sort out which are earning them a ‘yes!’.

I have tweaked this game a bit by only marking inappropriate behaviors with a ‘no!’, just so pet owners can experience the results first hand. If you are playing this game and trying to figure out what to do by being told all the things you are doing wrong, it quickly becomes frustrating. Only the most committed players stick with it, shy, timid or reluctant players rarely get far. What you tend to see is lots of stillness broken up by deliberate movements; raise arm, ‘no’, raise other arm, ‘no’, turn head left, ‘no’. It’s not a very fun way to learn and the folks determining correct behaviors soon tire of the game themselves, they want to see the players succeed.

It’s not unusual for players to give up and stop. Herein lies the problem for pet owners. A dog that gives up trying to figure out what their owner wants of them may actually be behaving in a more acceptable way than they were. This is not a big problem if the only thing their owner wants of them is to have them sit down, lie down or stand still. Indeed most pet owners would be happy if their dogs performed these few behaviors on cue. But the behaviors that get oohs and aahs and compliments of ‘what a smart dog!’ are behaviors which were learned because the dog figured out what was wanted of them, or were shown what they needed to do and were rewarded for it, not because they gave up trying.

Dogs in general like to be able to predict outcomes. Not surprising, so do we. Scared dogs especially do better when they can predict what is going to happen next in their world. As obvious as something might be to us, it’s not fair and often not correct to assume that it’s also obvious to our dogs. Make the unpredictable thing unpleasant, scary or painful and you up the anxiety level of an already anxious dog. Until the dog is able to learn to predict what precedes the unpleasantness, and even then, their overall anxiety can increase. And since life is not a laboratory, what predicts the unpleasantness may not end up being the behavior you are focusing on but rather something else in their environment, something you may not be aware of or have control over. Heck it might even end up being you!

Fearful dogs have brains that are very efficient at being scared or feeling bad. Giving a fearful dog ANY reason to be scared or anxious just adds to this proficiency. Training methods that hurt or startle a dog can add to the already overloaded baggage these dogs are carrying around with them. If you’re frustrated or not sure how to change your fearful dog’s behavior find a trainer who plays hard, fair and doesn’t hurt.