Subscribe to Our Newsletter
By fearfuldogsPublished On: October 2nd, 2012

I was reading a post in The Crossover Trainer Blog and was struck by the implications of this comment made about her observation of Cesar Millan at his ‘Dog Psychology Center’.

“……..He walked in with me and one could definitely sense he had an effect on the dogs. I concede he does have “something” about him that effects the dogs. ”

Not sure why there is an implied apology in ‘conceding’ he has an effect on dogs. There is no doubt he does and the Orwellian irony of what it is seems lost on many, including him, with his talk about ‘unstable’ pack leaders.

Dogs, even dogs with behavioral challenges are not stupid. Many are hypervigilant and extra sensitive to anything they perceive threatens their safety. Anyone, man or beast, who comes into their environment is immediately assessed for their potential threat to the dog’s safety. Even if a particular dog was not physically restrained, alpha rolled, choked, shocked or poked (all main techniques of Mr. Millan’s ‘rehabilitation’ repertoire) they will respond to his ‘presence’ and the reaction of those dogs who have been ‘dominated’ by him. It’s not unlike sitting on a subway and having a young thug get on the car and giving you one of those, ‘I WILL kick your ass bitch’ stares. They too will have an ‘effect’ on the pack of riders.

The Stockholm Syndrome is a real and well documented psychological response to fearing for your life. One need not even be submitted to constant abuse in order to ‘give up’ trying to fight or flee. The random threats of violence are enough to keep kidnap victims sitting in cars while their abductor runs into the gas station for a cup of coffee. Some victims even fall in love with their captors. Take away a dog’s control, an easy thing to do with choke chains, muzzles, shocks and prongs, and it’s easy to get the same kind of ‘compliance’. 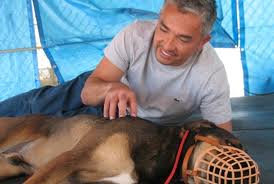 What choice does this dog have?

A dog subjected to repeated acts of ‘dominance’ by their handler, acts which likely seem as random and unreasonable as those portrayed in movies by the bad guy who pistol whips the hero for looking at his shoe laces, can also be adversely effected by this treatment. That Cesar Millan repeatedly misreads signals and cues from dogs is no secret. That he, and trainers of his ilk manage to convince pet owners that their mythologies of dog ‘psychology’ are accurate and justify their abusive treatment- the more upset and needing special attention the dog, the more abused they are- is no surprise. But I will leave it to the therapists to determine if there is a form of pathology in it and our willingness to watch and pay for it.

One day when our consciousness evolves there may be a tribunal and people who abuse animals, in the name of training or rehabilitation, will be called to task for it. And seats should be saved for the TV producers who seek these people out to make a profit off of the recorded and televised abuse of dogs.