Subscribe to Our Newsletter
By fearfuldogsPublished On: August 28th, 2012 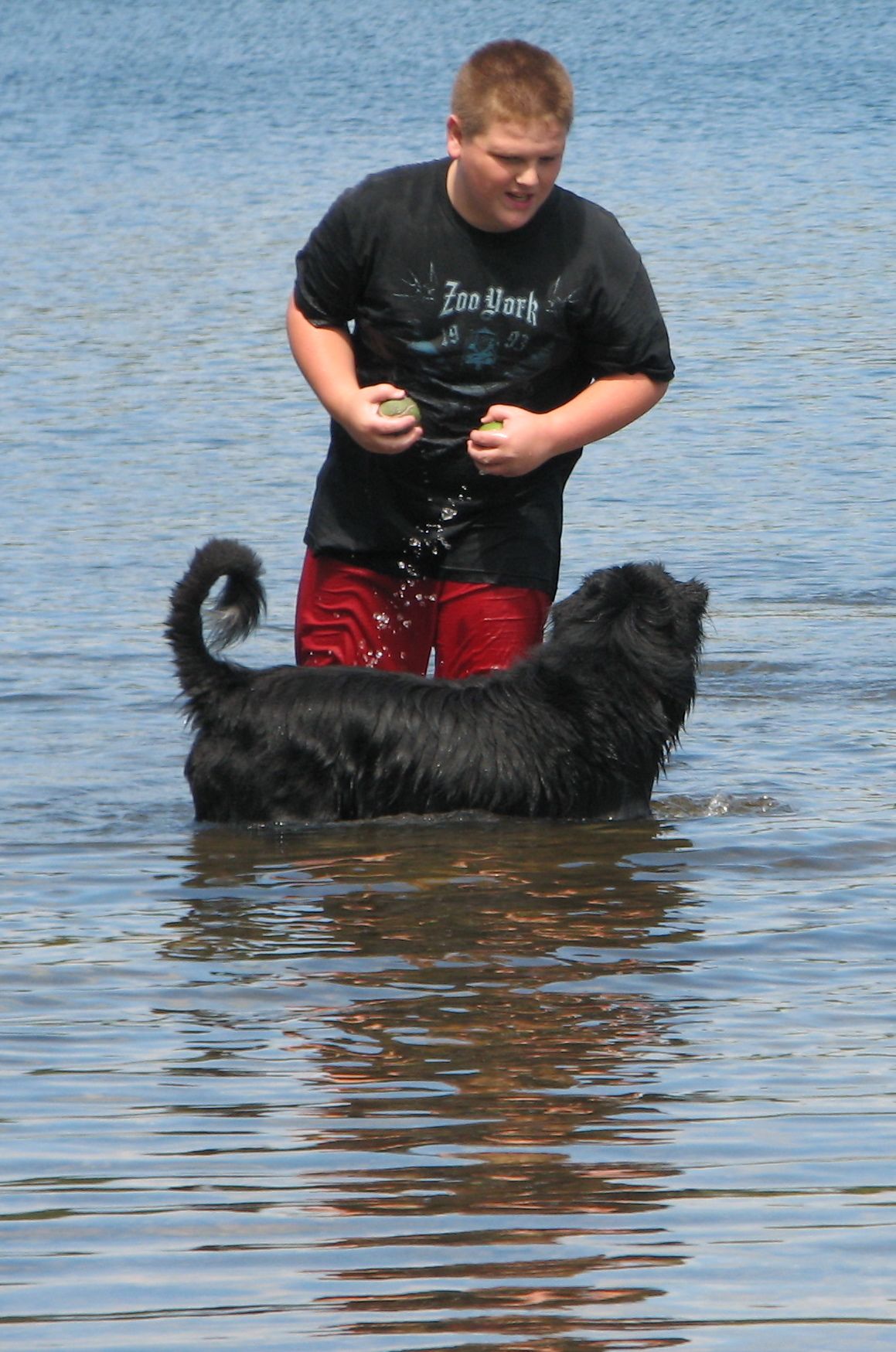 Sunny is my dog with the most fear based behavior challenges. For short I call him my ‘fearful’ dog. It’s not an accurate description of him, because he is so much more than just fearful, in good ways and bad, but when managing him around people, it’s the easiest label to slap on him. It’s either that or, ‘he’s not right in the head’, which is also true, but I like even less.

There are few people that Sunny sees and doesn’t feel frightened by. I can count them on one hand, and not need to include my thumb. This summer we added one more friend to the list, soon I’ll need that thumb.

I have spent the past two months in Plymouth MA at a lovely lake where the dogs and I have had a blast, as we say around here. The biggest challenge, other than dirty, wet dogs messing up the carpet in someone else’s home, has been their barking. At our home in Vermont there are no neighbors to worry about bothering, and not many people going by to cause the dogs to bark. It’s been a different story here. Next year I’ll have a better fence system.

One afternoon I noticed that their barking was instigated by a young boy who lives across the road. He barked, they barked. I was not pleased, but I’d rather have good relations with people who live near me, especially those whose prefrontal cortices are still developing (there’s no telling what kids will do when they are upset with someone), so I headed to the gate with clicker and treats in hand. Spying me the boy stopped barking, anticipating that I was going to tell him off, but I called out to him to keep it up. “Bark again!” I shouted. Boy barked, I clicked and treated the dogs. “Again!” Soon the barking boy was all but ignored for the click and treats. Realizing he wasn’t ‘in trouble’ he came over and asked if he could play with the dogs. I had reservations, primarily about Sunny, but invited him in.

I handed the boy my treat pouch and instructed him to toss treats to the dogs. Soon he was encouraging them to do their tricks and was thrilled when any of them came up and took a treat from his hand. Finn had a new frisbee tosser and Annie was beside herself having the opportunity to throw out all of her tricks for treats. The boy’s visits became daily events and long story short, as they say, Sunny is happily excited to see him. Here’s why I think it’s gone as well as it has-

1. The boy respects Sunny’s space. I was very clear about this and explained how he should behave with Sunny. During one of his early visits Sunny scared him, doing exactly what I was worried he’d do, one of those charging BOOFS! that makes your heart skip a beat. I wish it could have been avoided but it may have been a good thing. Sunny can seem like a playful, happy dog and many people do not appreciate how easily startled he can be. The boy saw this and became more thoughtful in regard to his interactions with him. My admonishments to this effect were not enough to get the point across, it was something he needed to ‘feel’ was important in order to comply. His own amygdala sorted that one out for me.

2. There was a lot of good stuff going on. Along with tossing treats and asking for tricks, the boy threw frisbees, balls, sticks, stones into the water and generally provided a fun diversion for the dogs whenever he came over.

3. It happened a lot. Sunny needs lots of positive interactions with things that scare him to change that feeling. The boy’s daily visits lasted on average for an hour. During that hour there were countless playful interactions between the two of them. Sometimes Sunny moved away from the boy, but mostly he moved toward him. Sunny was visibly let down when the boy headed out of the gate for home each day.

4. Other than for vetting and grooming Sunny has not had people try to touch him. He can predict that strangers are not likely 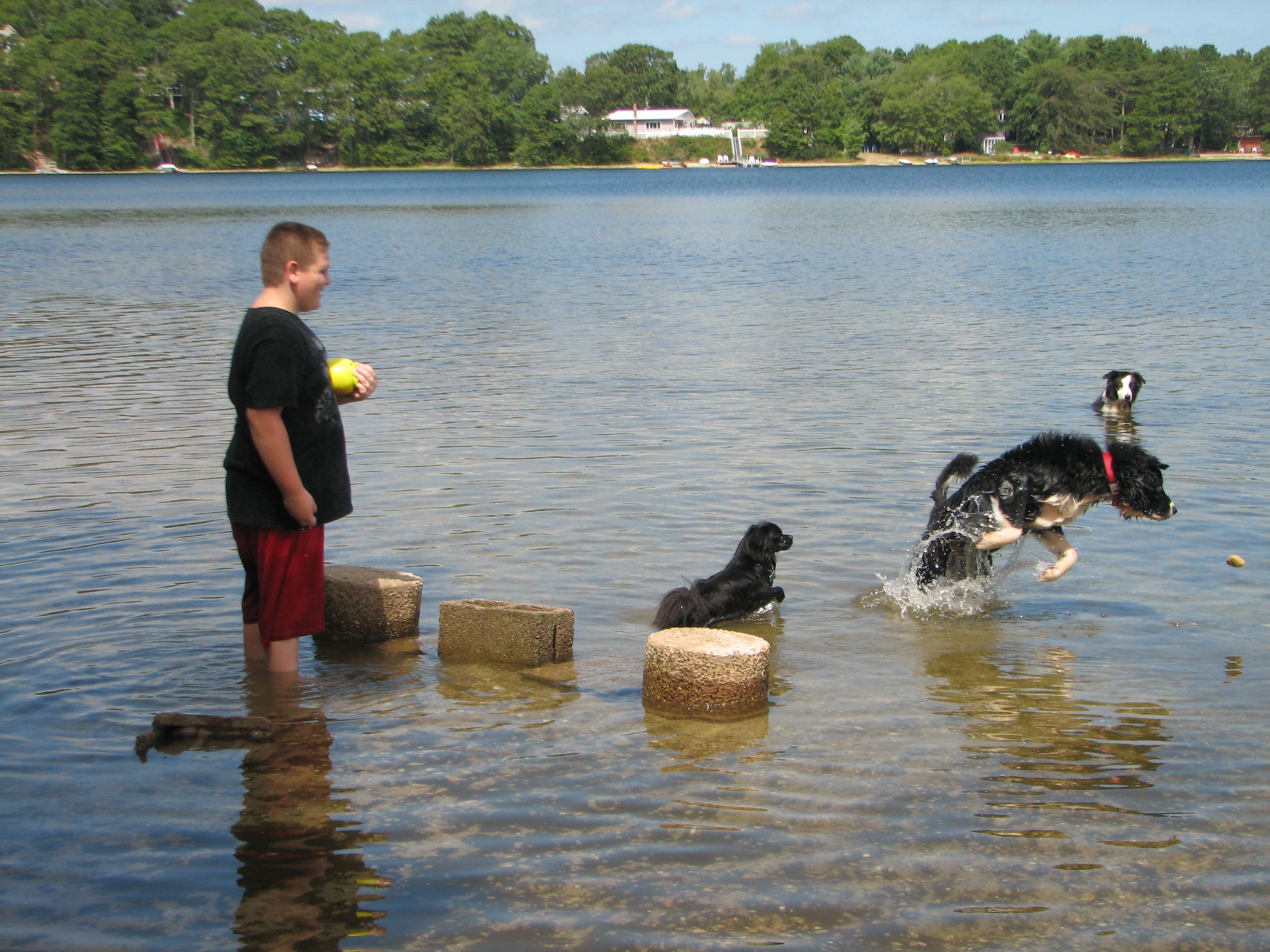 to do the thing he is most afraid of- making contact with him. He can relax around people, to a degree.

5. Play is hugely rewarding to Sunny. Scared dogs brains can become very efficient at ‘feeling’ fear. I wanted to help his brain get better at feeling good. To do this I used food and play. The pleasure Sunny gets from chasing balls outweighs the concern he feels about the person tossing them.

We’ll be leaving here in a few days and I’ll miss my daily swims in the lake and I know Sunny is going to miss the kid.