The responsibility of rescue

Subscribe to Our Newsletter
By fearfuldogsPublished On: June 6th, 2010 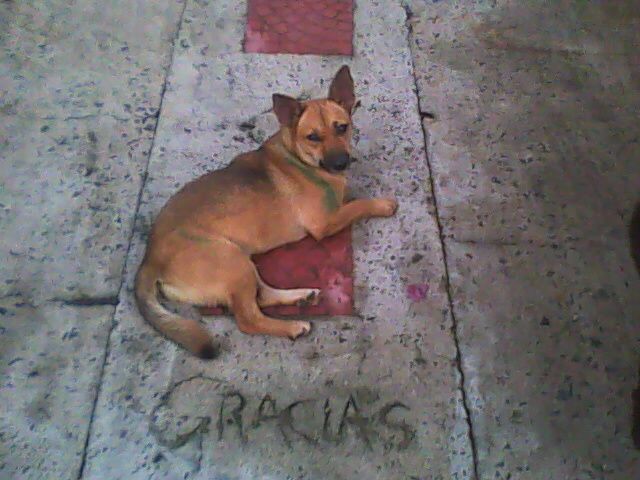 I recently returned from a trip to Puerto Rico, where in my other life, I often travel with groups for my work in organizing active, educational travel adventures for women and students. While staying at the Seagate Hotel, run by Penny Miller, who years ago was among the go-getters who helped get a shelter and clinic built on the island, I met several of the dogs who have been lucky enough to have found a home, even if only temporary, there with her.

Stray dogs in Puerto Rico are called ‘satos’.  Many people believe the name to designate a particular breed of dog, an idea which is supported in part because there is a certain ‘look’ to these dogs. A typical sato has short legs, big bat ears, a long body and a tail that would make a larger dog proud. But because dogs are imported to the island (from puppy mills in the U.S.) for sale in pet shops and because as a territory of the United States it is possible to transport dogs to and from the U.S. with only a health certificate, you will find any and all breeds of dogs, and their subsequent, too often homeless, offspring, wandering the streets, beaches, forests and parking lots, foraging for food.

It was my experience in traveling in Puerto Rico and witnessing the suffering of the homeless dogs on the islands that I became involved in rescue work. Along with the support of shelters and rescue groups on the islands of Puerto Rico and Vieques and the local shelter in my hometown I helped to find homes in Vermont for satos. Due to the fact that there are few small dogs available at our local shelter, the little dogs of Puerto Rico were quickly adopted. I like to think that all of their stories have happy endings, but I know too much about the realities of rescue to believe that to be true. In my enthusiasm to get dogs into homes I realize now that, despite my and the shelter’s best of intentions, some dogs likely did not find the pot of gold at the end of their rainbows. It has been several years since I have done more than allowed dogs to be flown back to the States as part of my baggage (since 911 dogs can no longer fly unaccompanied) but I still feel a connection to these often resilient and as often clownish, pooches.

While attending a seminar about the handling and capture of feral dogs, presented by Mark Johnson DVM of Global Wildlife Resources I met a woman who had adopted two satos recently rather than see them euthanized due to their extreme fearfulness. Her frustration with both trying to help these dogs along with the knowledge that someone chose to send these dogs to another shelter where other dogs like them were euthanized because they were not adoptable, was palpable and completely justified in my opinion. I understand why people become upset about the transport of dogs from one area of the country or world to another, in order to find them homes. Groups like the Massachusetts Animal Coalition strive to help the homeless animals already in their area.

And although I understand the reasons why someone might not support the transport of dogs for rescue I am also of the mind that ‘a life’s a life’ whether it started in my town, Puerto Rico, Kuwait, Tennessee or a reservation in the Southwest. It is true that both the financial & environmental costs of transporting dogs are higher the further away the animal is, the cost of ignoring their plight seems much higher to me. I am always inclined to support someone when their motivation comes from a place of compassion and caring. It is a human response which we need more of. So even though constructing a new building may be less expensive, I can understand and support why people might fight to refurbish a historic, old, crumbling gem- or spend their nights chained to a sequoia tree to prevent its felling. When someone questions, usually derisively, that, why when there are so many homeless, starving children in the world, am I so bothered with helping dogs, my response is this: There is plenty that needs to be done to make the world a better place, and while no one person can do it all, each of us can do something. Find what moves you and act on it. If helping children, or elders, or environments, or cultures, moves you, than do something. Especially do more than just finding fault with what someone else is doing.

Knowing that a fearful, anxious dog has been handled, transported, handled again, gone through vetting and neutering, possibly rehomed and returned to the shelter a number of times, before he is ultimately put down, nags at me though. I imagine the suffering and horror that the dog has had to endure and rue any of my involvement in facilitating that to occur. I routinely speak with people who profess that they will never adopt a dog from a shelter again after an experience with a fearful rescue dog. And who but the people doing the rescue have the experience and the responsibility to prevent that from happening? I know that rescue work is not easy and I’m not meaning to find fault with any particular rescue group or dogs from any specific place, fearful dogs can come from anywhere, but we need to remain diligent and educate ourselves on the realities of fear based behaviors.

I think it is good to be moved to help dogs and compassion for them should be nurtured and reinforced however it manifests, but our responsibility is great because we often know more than most of the people adopting these dogs and certainly more than the dogs themselves about what possible future awaits them. Our responsibility lies not only in finding dogs homes but in ensuring that the people who adopt them will seek out shelter dogs again in the future, wherever in the world they are from.